What You Need To Know About The R22 Phase Out

Happy New Year! A new year means change. And in the HVAC industry, one of the biggest changes taking place is R22 phase out. R22, also known as freon, is being phased out of the United States. Starting in 2020, it’s illegal to manufacture R22, or import it from other countries.

What does that mean for you as a homeowner?

Why R22 is being phased out 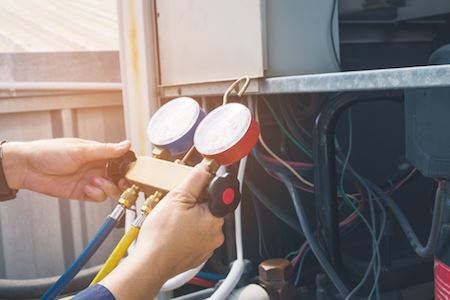 R22 is a chlorofluorocarbon (CFC). CFCs have been found to contribute to the Greenhouse Effect. They are involved in the destruction of the stratospheric ozone layer, which increases exposure to UV radiation. That impacts humans in a variety of ways, including an increased risk of cancer.

What if I have a system using R22?

If your home still uses an HVAC system with R22, you can still use it. Your system isn’t “illegal” just because the calendar moved forward. However, with both the manufacturing and importing of R22 now being illegal, that means the supply of R22 is quickly decreasing. If we don’t have access to it, it can’t be used to recharge your unit. At this point, nobody knows how quickly the supply will last. When it’s gone, it’s gone.

If you’re not sure, the easiest way to tell is to find your manufacturer’s label on the outside of your system. It should list what it uses as a refrigerant – R22 or R410a. (Sometimes manufacturer’s list R22 as HCFC 22.) R410a is the newest refrigerant,, and is being used because it doesn’t impact the ozone layer.

If you haven’t had your HVAC system serviced in a while, it will benefit you to make an appointment now. This is the best way to determine the status of your heating and cooling system, and to have it recharged, if needed. One of our technicians can also give you a better idea of the functionality of your equipment, and let you know how quickly you’ll have to think about replacing. This can give you time to budget for new equipment.

R22 phase out will be challenging as we make changes throughout the Rocky Mountain region. But with a little foresight, you can stay ahead of the curve, and ensure your HVAC equipment works well no matter what the weather is like outside.