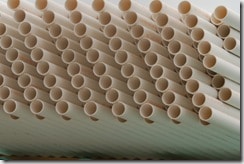 piping, including some that may be no longer used within the industry.

Plastic
Most homes built since the mid 1970’s have plastic pipes and fittings. Plastic is inexpensive and easy to work with – the joints can be connected using primer and liquid cement.

ABS pipe is the first plastic piping to be used in residential plumbing. Black in color, its easy recognizable, though many new construction areas no longer allow ABS because the joints have a tendency to come loose.

PVC pipe is white or cream in color, and is most commonly used for drain lines. It’s strong, indestructible by chemicals, and lasts indefinitely.

Copper
Copper pipe is commonly used for water lines because of its resistance to corrosion. It’s more expensive than the widely used plastic, but is great for long-term projects because of its durability. Copper pipe comes in two types: rigid and flexible. Flexible is often used for dishwashers, refrigerator icemakers, and other appliance that use a water supply. Rigid is thicker, and as its name implies, is more solid in form. It’s often used throughout homes, and in outdoor and drainage applications.

Cast Iron
Cast iron piping was typically used in homes built before 1960, and was commonly used for drain lines. Because of their tendency to rust over time, it’s important to call in a quality plumber to replace any existing cast iron piping.

Steel
Galvanized steel pipe is also commonly used in older homes. The average life of a steel pipe is around 50 years, so it’s better to replace existing piping instead of repairing.

PEX
PEX, or cross-linked polyethylene pipe is the newest pipe used in residential construction. It’s easy to install, flexible, and uses compression fittings. Currently it is more expense than copper or plastic.